Five Gold Rings; how Christmas came early for Olympic Contractors and how Bankers don’t care when Christmas is as a Bot can keep buying and selling, by Chris Edwards

In August 2012 several pounds of gold securely locked in storage in London will be released to public view in a constant flow of publicity over a six-week period. 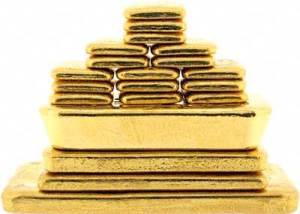 Most gold is bought on a global market in which source is not known and not important so long as the gold is pure and the price is right. That is not the case with medal gold. The medals for the Olympic games are made under contract to agencies that buy the gold from specific sources on account of the particular requirement to introduce a specific amount of gold into the world markets on a non commodity basis at a particular time. This is gold that will not be traded. It will go from ground to furnace to die and casting,and every ounce of that will be planned and accounted for in advance of the process.

Although it is only a few thousand ounces in a global mountain of hundreds of millions, the fact it is from an identifiable source is of real significance as most gold is not. Once it has left the refinery as an ingot and been issued with a verifying certificate by the Bullion Vaults, it is stored away in a vault as collateral for an investing agency, or securitised to provide gold bonds that trade on the market like stocks and shares. However should an investor purchasing a certificate for gold have the audacity to ask to see his ingot..well, my friend , start looking.  At this stage It is impossible to trace the thread back from ownership of the certificate for gold, thence to the actual gold certificated as owned, thence to the source of that gold. Unless you win a medal. In which case for this year 2012 if you want to find its source then go east and keep going to…Mongolia, where you will find a massive western company extracting the ore using cheap labour in a remote location with minimal supervision or control. That means big profits for someone but not the workers who work in one of the o=most dangerous mining conditions of any in the world.

China is one of the largest gold buyers in the world with the specific aim of becoming the country which owns the largest reserves in the world. The Chinese people have also caught the vision and are investing in gold in an unprecedented way. There is a difference however between the state and its people in this matter. If the state buys gold someone picks up a phone or sends an e-mail asking to buy; someone in a broker or bank puts them n touch with a country wanting to sell; and at the press of a button an order goes out to John Doe in the lower 10th floor vault in Manhattan. He jumps on to the fork lift and moves one or 2 pallets from one pile to another and lo! China and the US have done a trade. Does anyone know or care where this gold is or what happens to it? Not really. The Chinese people or other individual investors however take a different view. They want a certified gold bar in their name and proof of its actual existence. There is a market for this investor and it is called the allocated gold market. In this market he can in theory go to the repository and demand to see his gold bar. So you can sit a home and become one of the savvy investors who are keen to own the metal and do not trust the bond or share trading system.

Alternatively you can become a banker and employ an automated system to source your buying and selling. Bankers employ a variety of “e-bay” programme called bots which scour the markets for gold deals and buy and sell on a 24 hour basis. So a further layer covers the process.  Now a person buying gold through a banker has an automated application working to source a gold price for ingots that are not specifically identifiable, being within the global vault , whose source is unknown and which once bought he has no idea where it is, and nor does anyone else. And the banker really does not care at all so long as he gets a profit off the deal. And in fact most gold deals result in basement John Does moving existing gold from one place to another ; they are not fueled by new to market produce.

It has been said that the walls of bank offices are lined with worthless gold-bearing certificates and that is probably more true today than ever before. The lure of the incorruptible metal remains irresistible. The 100 million people who work in the gold industry globally are simply irrelevant to these dealings. What if there were a way to influence the market so that new gold although a small percentage relatively were part of a tribal system where the supplier had a relationship with the gold owner and that relationship possessed an intrinsic value? That would mean that bots could not be used so easily to manage the market as they cannot be programmed with ethical value. That would mean that the market makers would have to become involved and become aware of the true identity of the gold they were buying and selling. Is that so hard to imagine? We have Fairtrade in everything and even in gold although it is restricted to the jewellery trade at present. If we had a Fairtrade market in gold bars then it would help these workers to recover their dignity earn a fair wage and perhaps even bring a reality check into Boardrooms when dealings in the metal are concerned. Oh yes; and you Olympic athletes could truly wear your medals with pride.

Hot tips on being an Ethical Jeweller.

Slavery – No jeweller wants to talk about this.