“TNG is so confident of its deposit, and its plan, it wants to bypass the usual bankable feasibility study and go straight into permitting for production — and make the deal with a Greenlandic bureaucracy that’s fresh out of the starting block.” Canadian  Mining Journal.” Canadian Mining Journal http://www.canadianminingjournal.com/issues/story.aspx?aid=1000380572&type=Print%20Archives 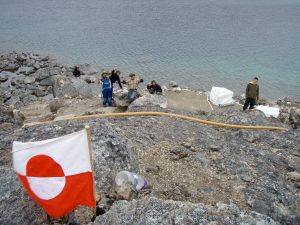 Now we learn, according to a new article in the Canadian Mining Journal, that TNG is openly attempting to “bypass” (or more accurately break) established laws of Greenland usually governing mining companies. TNG wants the Government of Greenland to grant the company an “exploitation license” in order to commence mining immediately, without providing the usual study.

Until now, Greenlandic mining law specifically requires an independent, bankable feasibility study that calculates the operating life of the mine and describes the business plan of the mining company. In all civil society, natural resource development projects, a bankable feasibility plan is a required legal report that is absolutely critical to community and government understanding.  Such a study documents the scope of the environmental and social impacts that will require assessment and mitigation.  Without it, regulators and concerned citizens are ‘flying blind’ with no idea of precisely what the company intends to do.  There are also no benchmarks for recourse when disasters happen.

Anyone who has followed some of the 36 articles on Greenland’s Apartheid Ruby published on this website, http://www.fairjewelry.org/archives/category/greenland-rubies will recognize that the 16th August Union, which represents small scale Inuit mining in Greenland, has valid concerns over the close relationship between TNG and the BMP.  TNG’s proposal to “bypass the bankable feasibility document” is extremely unusual and virtually un-heard of in modern banking and resource development.  To use an analogy, it’s like getting married without any wedding vows.

Given the prominence of the article on the TNG website, and the fact that TNG has not published a retraction or correction, we can only assume the information is accurate.   Not only has small scale Inuit miners in Greenland been disenfranchised from their Constitutional right to gather and sell gems which was enshrined in their constitution until the documentation of valuable ruby deposits, but the larger mining interest can bypass studies that are foundational in civil society.