Sierra Leone is apparently one of the poorest countries in the world. Definitions of poverty of course vary dramatically from the rather spurious measure of GDP per capita (gross domestic product per head) of which Sierra Leone is ranked 175 out of 182 at $804 USD income per head per annum, to the rather romantic notion of the simple peasant egalitarianism sharing all things in common and with a deep connection to the land. Poverty in my understanding is all of these things and much more. It has a deeply sinister face that wields the cruelest stick with which it beats its subjects, the stick of ‘hopelessness’. In its purest form, its spiritual essence, poverty is the destruction of hope. It is the robbing of humanity of a tomorrow. With no tomorrow, their is no future, with no future there can be purpose and people perish for a lack of hope. As I witnessed on this Fairmining trip to Sierra Leone. The toil, the stress, the pounding of flesh and muscle under the scorching heat of a Lake Sonfon sun, as the gold diggers move tonnes of earth to extract carat weights (0.2g) of gold for Le20,000 ($4.50 USD) per day. Gold is a cruel master if you are a digger. Lake Sonfon boasts in excess of 15 thousand miners. That works out at approximately 100 miners per crocodile. 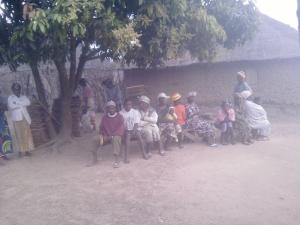 Village in Samaia Chiefdom that stands to benefit from Fairmining

Sierra Leone is apparently one of the poorest countries in the world. Its rural villages hum to the nasal sound of the mullah’s call to prayer in the tiny mosques built by the Bangladeshi army and western Muslim Aid Agencies. Or the clanging and banging of wheel hubs, pretending to be church bells as the Pentecostals call their faithful to prayer in imitation of the American TV evangelists who have done such damage to the genuine Christian faith. It strikes me as strange that in the heart of poverty the worlds two most culturally imperialistic ideologies of America and Islam find a common cause and ground. Yet as we traveled, or more accurately bounced through  the gold fields of Samaia, Diang and Sandaloko Chiefdoms we see little answer to the prayers for justice of the poor. The villages had nothing, no electricity despite the power cables from the hydro electric dam that feeds Freetown passing right over our heads. It would seem that the light had forgotten to stop and say hello. The villages had nothing. It took me three days to work out what had been niggling at me, the markets where empty. Normally on my travels markets are full of people selling tomatoes, greens, garlic, local fruits and other staple foods, yet here the tables were eerily empty and silent . The scarcity of basic food stuffs was another indicator of the daily grind of poverty, living day to day, hand to mouth, the manifest robbing of tomorrow.

Sierra Leone is apparently one of the poorest countries in the world. Yet as we dug deeper in to the districts in search of Fairmining gold partners, it became increasingly obvious that Sierra Leone is also one of the richest countries in the world. One small girl no older than my 10 year old daughter pulled out a cigarette box lining from her dress pocket and showed me the 2 carats of gold she had collected the previous day. It appeared everyone of whatever age had some gold in their pocket. So what is true for many other African mineral rich countries is also very true for Sierra Leone, that the riches of the land do not benefit the people of the land. The popular wisdom for these injustices are cited as; corruption, poor resource management, lack of skills and knowledge and massive under investment in infrastructure. Yet despite all of these facts, which would no doubt all ring true in Sierra Leone, my consistent observations on the ground, not only in Sierra Leone, but also across the African continent as a whole, is that if you do not have local and culturally appropriate strategies for developing local economies, you will end up with mass poverty and unemployment. I may be flirting with the ‘realpolitik’ of economics, yet it is surely a truism, that if you get the policy wrong you will will not get the desired outcome.

Let me illustrate the point from my recent visit. We were meeting communities to talk about how we can make the gold business a more fair proposition for the local people. I consistently heard from miners and community people alike that they were fed up with large scale mining companies, coming into their areas, taking their land without consultation, using laws set in Freetown (shaped by the Adam Smith Institute that bastion of free market dogma) to justify their occupation, employing as few people as possible, investing into the odd clinic or school and building literal and metaphorical fences between themselves and the local people. The animosity was as tangible as it was unnecessary.

The London based African Minerals came in for the most complaint, especially around land grabbing and mining of their lease. Indeed a chance conversation with a human rights lawyer revealed the alleged incarceration of over 100 local people over a false, unproven and uncharged accusation of claim jumping. At the time of talking the lawyer was busy proving that actually it was African Minerals who had taken the land from local people and were mining off their lease. Of course the local people’s complaints are justified, the policies that shape this kind of behaviour are based upon a free market dogma that is not relevant or in dialogue with local people. I discovered that local people are very adept at analysing their predicament, they know they are poor, they know education is a key, they know skills investment is required, they know how to work gold deposits, they also know that they do not want to rape the land, why should they, it is their home, unlike the foreign mining companies. What local people lack is policy makers taking them seriously and allowing them to shape the resource to benefit local employment.  The resource curse is alive and well in Sierra Leone. The gap between unemployment and employment in the small-scale mining sector in Sierra Leone is $10 USD. For this you can buy a shovel, a sieve and a panning bowl that will get a miner started and able to earn $5 to $10 dollars a  day. In no other part of life would an absentee theorist with an ivory tower degree in abstract economics be allowed to gamble with a nation’s wealth and prevent this kind of opportunity, like they are in the mining industry. I would cry emperors new clothes but that analogy would be a false one as the emperor although arrogant was also stupid. This more reminds me of the words of Jesus of Nazareth when he said, ‘woe to those who call evil good’. The people who create this kind of false ideology are far more sinister than a vain old man with a King Lear complex.

Yet what has this to do with jewellery and a blog aimed at ethical jewellers. Over the years the jewellery trade has traveled a long way on the road to a more ethical, traceable, transparent product, we have proved that supply chains can benefit the poor. We have been ridiculed by the big boys, patronised by the spivs in suits, yet we have proven that we can do jewellery differently. We can link the small-scale miner in his or her rugged location with the small artisan jeweller. Least we forget the small designer jeweller is still the bulk and back bone of the jewellery trade in the same way the small-scale miner is the back bone of the mining sector.

Yet our biggest challenge in liberating the jewellery trade from the tired dogmatics of ‘big is beautiful’ is in articulating a new economy throughout the industry. If Fairtrade Gold being launched February 2011 shows us anything it demonstrates what is possible. We can re-envision the economic ethics of the jewellery profession. We can create a new narrative that will shape a new set of trading relationships and we can develop systems that can drive more value to the poor and the environment

For me as one of the architects of the Fairtrade gold system, I now face a fresh set of challenges in driving the radical ethics of justice and fairness deeper and wider into what is one of the most corrupt sectors on the planet. Fairmining a new commercial approach to partnerships with artisanal miners is about creating real opportunity through equal partnership and driving shared values and shared profits back to communities for their own development. But there will be much more on this process over the next few years as we look to build on the recent successes within the Fairtrade Movement.

Sierra Leone is a nation full of wealth and promise. It is a nation of passionate people who are keen to move from poverty to peace and prosperity. They cannot do this alone and from what I saw on my first trip, they don’t want to. They want to work in partnership. Perhaps this is the new ethic, values driven partnerships that are more than just the money.

A taster of Fairtrade Fairmined Gold

January 30, 2012
Previous Post The best gold story in the world
Next Post The Purest Gold for Valentines Day.